Familiarisation in the crèche: procedure of the Berlin Model

Settling in at the crèche often hits parents sooner than expected: the child has only just come into the world and already the settling in at the crèche begins. For all involved, parents and child, this is a pretty big, but also very exciting step. Despite all the anticipation of regaining a bit of freedom, parents also have to think about things: Is it perhaps still too early? Is my child ready? Shouldn’t we wait another year? While the children get to know new caregivers, the parents have to build trust and learn to let go. We at cocon day care understand you and your concerns and therefore accompany you every step of the way as you and your child enter this great new stage of life. With this article, we would like to answer all your questions and explain to you what the process of settling in at the cocon day care centre looks like, what exactly the Berlin Model is and how the transition to kindergarten as well as the transition to school is accompanied.

Why is settling in at the crèche important?

What exactly is settling in? The term describes the first weeks that the child is allowed to spend in the nursery. This initial period is usually quite overwhelming: so many new impressions, new smells, new faces, new rules, new routines and so many unknowns that first have to be processed. This can be quite a lot for a little person at first and usually the child needs time to get used to it all. Changes that happen too abruptly often make a child helpless and lead to frustration. In addition, there is the lack of a familiar caregiver.

Of course, the new situation also offers many exciting things, such as other children or new toys to discover. Nevertheless, these unfamiliar things are very appealing at first and should be introduced to the child bit by bit, a little more each day, so as not to overtax him or her. The unknown feeling of separation is also something the child is confronted with for the first time during the settling-in phase and should be accompanied carefully.

The settling-in period has a considerable influence on how carefree the child will experience his or her time in the day care centre. The child finds its place in the group, learns to trust its new environment and feels secure and strengthened. According to research on the settling-in period, a positive experience when entering the nursery also supports the child’s later coping with new beginnings in life, such as the transition to school.

The settling-in period makes the temporary separation easier for both the children and the parents.

Settling-in procedure according to the Berlin Model

There are different familiarisation models, whereby the Berlin model is most frequently practised in Germany. We at the cocon day care centre also believe that the parent-assisted, gentle acclimatisation is the best and so this model is also successfully used by us. Positive feedback from our mothers and fathers encourages us in this.

The Berlin Model is above all very needs-oriented. The decision about the time of separation and the procedure is individually adapted to the situation and the conditions of the child. The goal is a careful and gradual acclimatisation to the new environment so that the separation from the parents is easier. The approach that it is better and easier for the child to bring about a quick separation – similar to ripping off a plaster – is fortunately outdated. We at cocon share the opinion of the founders of the Berlin Model that a slow familiarisation with the nursery, in which the parents are involved, works best.

The Berlin Model is divided into 4 phases:

At the cocon day care centre, each family is assigned a permanent reference teacher with whom an initial interview takes place. In this meeting, the exact procedure is explained and all questions concerning the child’s needs are clarified. The first three days are used to get to know each other and to gain trust. The parents explore the group room together with the child for about 1-2 hours and then begin to become more passive from the second day onwards, so that the reference teacher can make contact with the child. This works best through play – because play can build trust.

At the earliest from the fourth day, an attempt at separation takes place, which is clearly discussed with the parents in advance and asks for their own willingness to do so. In this attempt, the parent leaves the room after some time for a short moment. If the child can be calmed down by the educator or if the child even reacts calmly to the situation, this first attempt at separation should last about 30 minutes. It is important that the parents consciously say goodbye to the child and do not simply leave the room. Initially, the settling in process takes place exclusively in the group room, as this represents a constant for the child. Our pedagogy works in a closed concept, which means that the children always start the day in their familiar environment, i.e. within their group in their group room.

Gradually, the separation phases are extended and the bond with the teacher is strengthened. The parent can now withdraw more and more. In this phase, it is especially important to us that parents and children get the time they need. If the first attempt at separation does not work so well, we take a little more time with a second attempt and extend the phase of getting to know each other.

As soon as the teacher has been accepted as the new caregiver, the parents no longer need to stay at the nursery. At this point, the settling in process is complete. Usually this is the case after about 3 weeks.

Advantages and disadvantages of the Berlin model

Familiarisation with the kindergarten

At the cocon day care centre, the acclimatisation or transition from the day care centre to the kindergarten is carried out by the teachers themselves. Through accompanied visits to the kindergarten, the toddler is prepared for the transition at an early stage until he or she ultimately wants to stay there. During these visits, the child gets to know all the new daily situations and the new group room while participating in various activities. In the weekly KigaClub project, topics such as “Colours and shapes” or “My body” are worked on in a differentiated way with the children according to a structured concept in order to prepare them inhatically for the transition to kindergarten. In addition, social-emotional skills such as the practice of understanding rules are acquired through play.

If an external child comes directly to the kindergarten, the acclimatisation process is similar to the Berlin model described above.

The final milestone that we are privileged to accompany at the cocon day care centre is the transition from kindergarten to school. For this, we work with an in-house preschool concept that prepares the children professionally for the demands of school within the framework of German, English and French preschool. In addition, the children are strengthened emotionally so that at the end of the kindergarten year they can proudly say that they are finally allowed to be a school child. It is important to us to promote the child’s strengths so that the child enjoys learning and exploring.

We are in close contact with the Sprengel and Munich public schools in order to constantly align our in-house pre-school concept with the requirements for school readiness.

Are you interested in one of our nursery places or do you need more information about the settling-in process?
Sign up now for an exclusive house tour where we will explain the settling-in model in even more detail.

We look forward to seeing you! 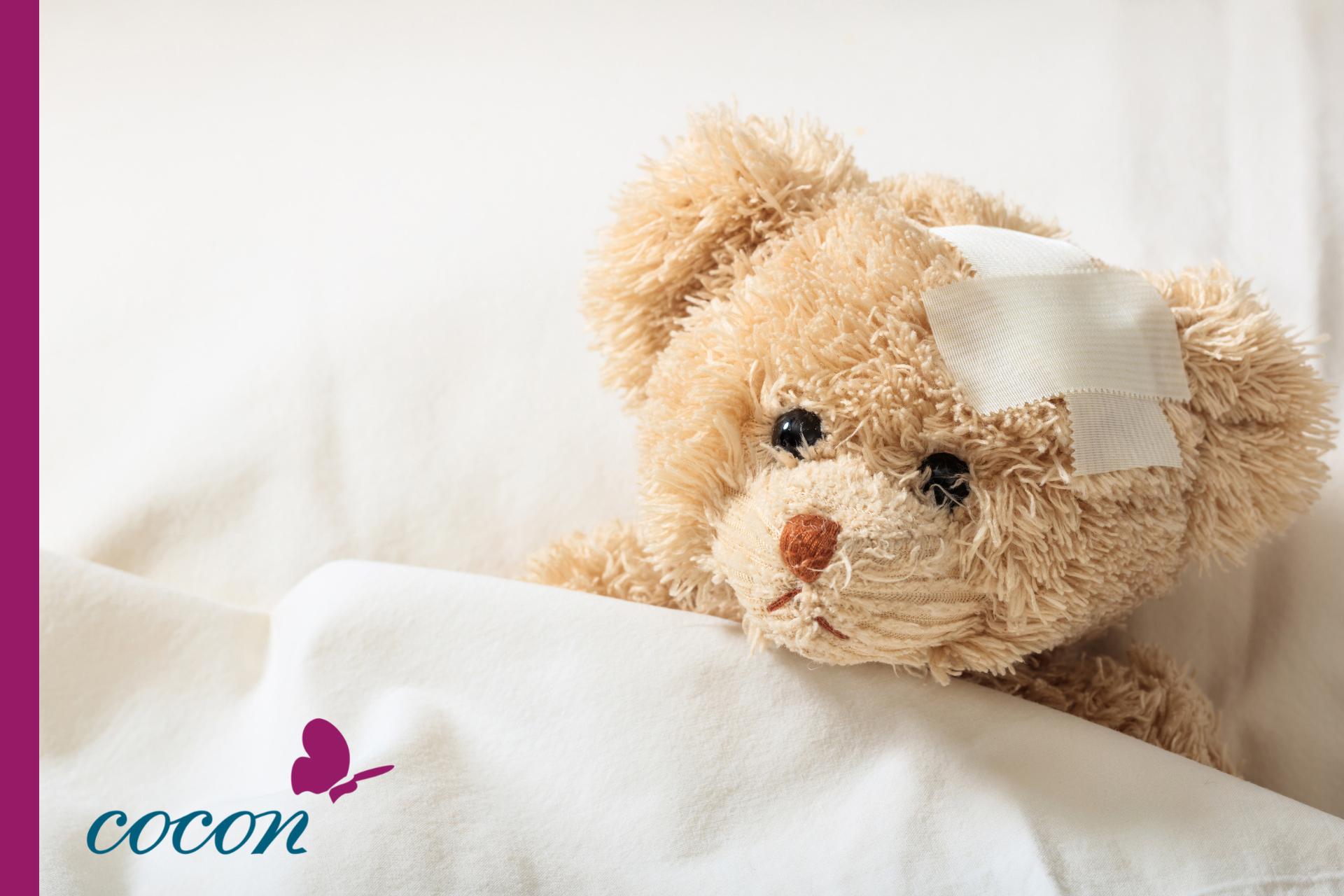 A wave of colds in the day care centre: why children get sick so often

“We couldn’t have done better. We knew at all times that our children were in the best of hands. In addition to the professionalism and above-average quality of the educators, house management, kitchen, services, etc., which is to be expected at this price, there is also so much love, recognition, attention and appreciation for each individual child in all educators / staff that it is actually a shame that it had to end at some point. It was a wonderful time, our boys and we loved it. Thank you for that!”
V. Zwoelfer

“The best daycare center in Munich! Everything is just right here!
I can highly recommend all parents who are looking for a second home for their children to have their child cared for at Cocon.”
M. Augustin

“Our daughter and we parents are completely thrilled with the facility. Everything is just right here. Starting with the beautiful rooms with three large garden areas. The home-cooked organic quality food that the children love so much. The art, music, sports, etc. activities on offer. And last but not least, the warm and dedicated caregivers, who also playfully teach the children their native language, which in a very short time showed unbelievable success.”
M. Schönauer

“Cocon promises a second home. In fact, it is more than that. Individual support and a lot of nest warmth, that’s how we would sum it up after four years now. There are countless support programs and projects ranging from music and art to natural sciences and sports. Little researchers, gardeners and cooks are not neglected either. The educators are caring and very well trained, and there are regular in-depth development discussions. All this guarantees happy, self-confident and independent children at Cocon. As parents, we couldn’t ask for better educational partners for our child.”
M.N.

“Wonderful facility that lovingly cared for our children from baby to preschool age and actually became a second home. Extensive offerings included in the price, e.g. music with music teacher, art/craft, research. Permanent language support by English and even French native speakers. Above average trained and caring staff. At the same time, high level of flexibility and support with administrative issues. Great Kita/Kiga that we miss very much.”
Schwemer family

“Both our children were very happy here, as parents we appreciated the professionality and high standards in many areas – from the excellent food (which they still miss!), good hygiene and nice facilities, to the kind and supportive staff. The small exchanges with the teachers during handover, regular feedback and opportunities to discuss any concerns were so useful. As parents, we learned so many pedagogical approaches from the teachers, including tips on how to tackle the latest issue based on our child’s personality. It felt like a collaborative, yet professional and kind relationship over the years..”
O. Duffner